When using Instant Clone virtual desktops in your environment you will find several objects in your inventory that are used to run these machines. The next image shows the folders with the cp-template, cp-replica and cp-parent objects.

If you wonder what the relationship between these objects is and how they are being used for your virtual desktop pools then there are a few ways to figure that out.

This utility is available on every VMware Horizon Connection Server. It can be used to delete any unnecessary objects or to unprotect the objects but it also has a simple list-function. The output in the image below shows three master virtual machines (or Golden Images as you can also call them) that show their relationship with the templates, replicas and parent machines. 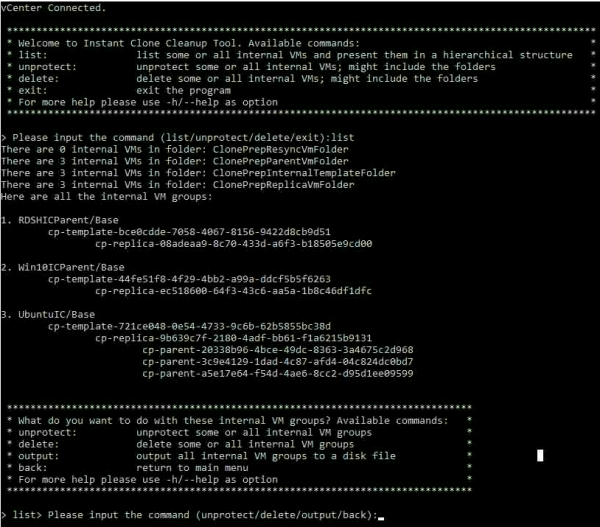 This output doesn't directly tell you for which Desktop Pool these are being used but you can probably tell from the used master virtual machines for which pool you have used them.

The utility is available on the Connection Server in C:\Program Files\VMware\VMware View\Server\tools\bin. The documentation for this tool is available here.

Using the Task and Events output

Another way of finding the relationship between objects is to have a look at the Events-information for each of the objects. I will show you this using two examples, one with and one without cp-parent virtual machines.

In the next image object cp-template-bce0cdde.... was used to create a replica-object named cp-replica-08adeaa9.... There is only a single replica because this pool was using a single datastore. For each datastore used by a pool a replica is created.

That replica-object was then used to create an Instant clone named RDSIC1 which is an Instant Clone RDS Host.

The previous example was from an RDS Farm with just a single RDS-Host. Starting with Horizon 8 there is a new feature that only creates cp-parent machines if there are more than 12 virtual machines in use per host. This feature is called Smart Provisioning and it works fully automatic. A pool starts with cp-template and cp-replica objects without parents and when you cross the threshold of 12 vms per host it automatically starts creating cp-parent virtual machines. One per host, per datastore.

In the image below you see a cp-template object that was used to create a replica like before.

This replica object was used to create three parent objects (three hosts, one datastore). In the image below I have circled one of the parents (cp-parent-20338b96...

That parent object, as you can see in the Events-tab in the next image was used to create instant clone UbuntuIC1.